I got the idea in my head the other day to write a Rubik's cube solver. While working on that I accidentally learned some interesting math that I thought might be nice to share. Here, then, is a brief, probably over-simplified introduction to group theory and its applications to Rubik's cubes.

What is Group Theory, Anyway?

Group theory is the kind of math that for whatever reason most people never know about unless they study math at a university even though the basics are simple enough that a first grader could understand them. There are really just two building blocks underpinning the fun stuff: functions and sets.

If you've programmed a computer or taken a high school math class, you already have the right idea of what a function is. Functions are basically like little black boxes that accept some input and map it to an output. For example, \(f(x) = x^2\) takes every number and maps it to its square.

The last major notational thing to mention that's relevant to group theory is the idea of inverses. The inverse of a function is just another function that "undoes" it. To use the example from before, the inverse of \(f(x) = x^2\) would be \(f^{-1}(x) = \sqrt{x}\) (ignoring the multiple square roots of course).

Now that we sort of understand functions and sets, it's pretty easy to make the leap to groups. A group has two parts: a set and an operation. These are usually written as \(G\) and \(*\) and the group is referred to by the tuple \((G, *)\). There are four axioms that these have to satisfy in order to be considered a group: closure, associativity, identity element, and inverse element.

In order to apply group theory to solving Rubik's cubes, we first need to understand how Rubik's cubes work. Since a Rubik's cube is, well, a cube, it has six faces. We call these up (U), down (D), right (R), left (L), front (F), and back (B). Each face is subdivided into nine smaller cubes called "cubies." There are 26 cubies in the Rubik's cube, \(3^3 - 1\) since there is no center cubie. Here are all of the faces labeled so you can get an idea of how they relate to each other:

Note that the centers of the faces never move relative to each other; in fact, if you take apart a Rubik's cube, you'll see that the internal structure actually connects all the centers together so the faces can turn. Most standard cubes look something like this: 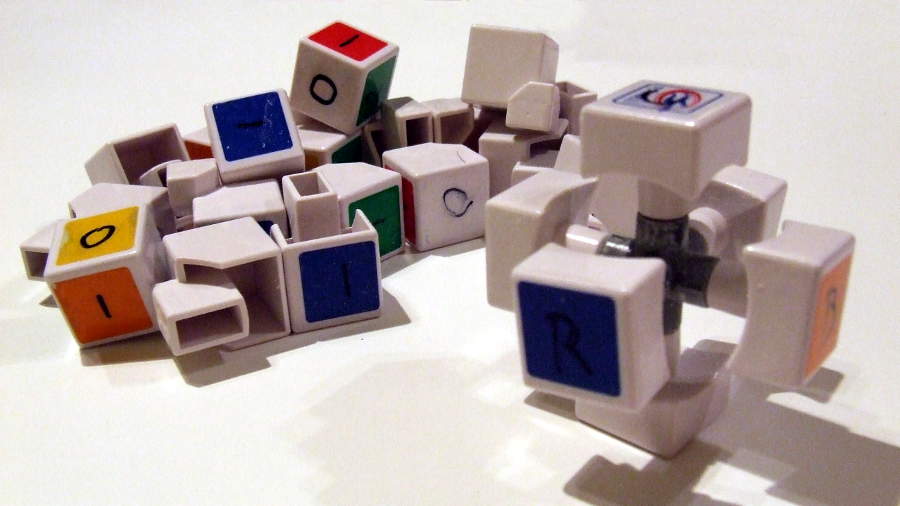 So Where's the Group?

Well, we know a group consists of a set and an operation, so what does that correspond to for the Rubik's cube? One way to think about it would be to have a set of all the possible cube states and use the rotations as operations for going from state to state. This sort of works, but we run into trouble when we try to satisfy the identity axiom: what move would be the identity move? Then of course there's the fact that we're actually trying to define six different operations on our set, which is too many for a valid group.

It's more useful if instead we use the moves themselves as the set (call it \(\Bbb G\)) and then the operation can be concatenating moves together (call it \(*\)). The trick is that a move might consist of zero rotations or millions of rotations - this allows us to represent every possible cube state as the sequence of moves that gets us there from a solved cube. So, does this make a group? Let's see if it satisfies our four axioms.

This one's a little tricky. First, it's important to note that this isn't the same thing as commutativity, i.e. it's OK that we don't get the same result if the moves are applied in a different order - we still have a group (a non-abelian group if you're interested). That aside, how do we show that concatenating moves is associative?

If we include a null move consisting of no rotations (call it \(E\)) in our set, then this requirement is satisfied since doing nothing followed by a move (or a move followed by nothing) is the same as just doing that move. That is, \(\forall M \in \Bbb G,\: E * M = M * E = M\).

Just proving that the group of Rubik's cube moves exists is neat and all, but it doesn't seem to be terribly useful. It turns out, however, that we can use groups to make finding solutions to scrambled cubes a lot faster.

If I were writing an algorithm to solve a Rubik's cube, I would probably (in fact I did) start with some kind of iterative deepening algorithm where we take our cube and see if applying any one of the base moves solves it. If not, we try two moves, then three moves, etc. Eventually we'll find the shortest solution, but it will probably take a very long time since there are about 43 quintillion possible cube states all within 20 or so moves. I tried this and it starts to get unusably slow around 7 moves, which is not enough to solve every cube.

One of the first fast algorithms for cube solving was discovered by Morwen Thistlethwaite. The so-called "descent through nested sub-groups" algorithm works by moving the cube state into subgroups that require fewer and fewer moves until it gets to the solved state. The first group, \(G_0\), is the same as our \(\Bbb G\) group; it contains moves made of all six base moves. The next group consists only of moves made of double turns of the up and down faces, but 90 degree turns of the other faces are allowed. The next two groups work the same way, eliminating single turns of the front and back faces and finally removing single turns of the left and right faces. From there, the only subgroup left is the one that contains the solved state.

This algorithm works because the subgroups are so much smaller than the original group that it's possible to construct lookup tables that tell you how to get from one subgroup to the next. The original algorithm used a few preliminary moves to get the cube into a state that matched the lookup table for the \(G_0 \rightarrow G_1\) transition, but now there are lookup tables for that as well. You can find these lookup tables here if you're interested.

If we take advantage of some facts related to group theory, we can take a problem that's too big to solve reasonably (find a solution to an arbitrary cube) and make it trivially solvable — modern cube solving algorithms can find solutions in milliseconds. Group theory has practical applications all over the place though; modern cryptography depends on it, pretty much any error correcting algorithm uses group theory in some way, and it informs a lot of current physics and chemistry research, among other things.

The ID solver I wrote, along with a little Rust library to support it, is on my GitHub if you're interested. I'll probably add some fancier solution algorithms (like Thistlethwaite's algorithm for starters) when I have time.